You are here :Homepage»The forgotten diseases

It is with great enthusiasm that the new road map for neglected tropical diseases (NTDs) for 2021 to 2030 was unanimously adopted today by delegates attending the virtual session of the 73rd World Health Assembly.

Neglected tropical diseases (NTDs) are a complex group of tropical infections in developing regions of Africa, Asia, and the Americas that are widespread in low-income populations. They are caused by a range of pathogens such as viruses, bacteria, protozoa, and parasitic worms (helminths).

There are 1 billion people affected with at least 1 NTD, add on top of that another 1 billion at risk and this brings the total toll above 20% of the population in the years to come. Hence why the WHO initiative to reduce and eradicate the most notorious NTDs is set for the following decade.

Treatment costs for most NTDs are relatively cheap. For instance, Praziquantel which is a drug used as an anti-worm medication costs about US$ 0.13 for a single 600-mg tablet and an average treatment is estimated to be between US$ 0.20–0.30.

Although the importance of this campaign may seem not as high as the eradication of other diseases, it is still a great step forward in order to increase the quality of life in developing countries and a great initiative to start implementing more access to healthcare and hygiene in regions that lack the basic access to treatment. 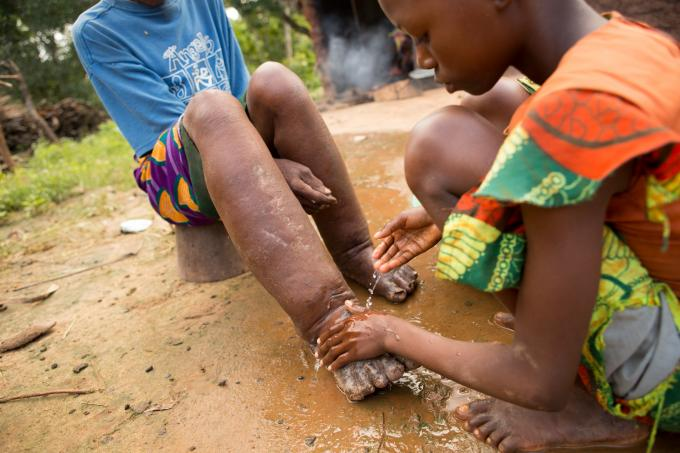 Elephantiasis caused by the parasite Lymphatic filariasis. It is listed as a Neglected Tropical Disease.

In order to deter, monitor, remove and eradicate 20 neglected tropical diseases (NTDs) and disease groups, the road map sets global goals and priorities. It seeks to encourage increased teamwork and cooperation by switching away from single-disease vertical systems to interconnected approaches. Another distinct aspect of this approach is to set a push for greater ownership by national and local governments.

The goals of the World Health Organization are stated as follows:

Here you can find a list of all the NTDs on the official Centers for Disease Control and Prevention (CDC) website.