You are here :Homepage»Effect of gene transfer to our microbiota

Microbiota are group of bacteria that dwell on us for surviving and in return they provide protection through first line immunity as well as assisting in different metabolic process; a good example is in production of vitamin K. Obviously, our microbiota are harmless and most of the times our relationship is beneficial on both sides; a good example is in our large intestine. It hosts hundreds of thousands bacteria that live there and cause no harm. According to the research made by Dwayne Savage in 1977 revealed that the ratio of bacteria to human cell is 10:1, but this was found to vary from person to person (Savage, 1977). His discovery was a milestone in field of microbiology as it contributed in understanding why our microbiota are crucial for living things. However over past decades, people were struggling on how these bacteria become pathogenic and what would be the mechanism behind it. After years of painstaking research, researchers around the world were finally been able to shade the light on the mystery by showing how gene transfer is the cornerstone for all these changes to happen.

What is gene transfer?

Gene transfer is the process by which a given species of bacteria can gain genetic material from other dead or alive bacteria through a variety of mechanism. These processes including transformation, transduction and conjugation,all these process will lead to a change in genetic makeup of the bacteria. Gene transfer is one of sophisticated mechanism these microorganisms have evolved in order to keep surviving from any harsh environment.  These processes are achievable through transfer of genetic material from one bacterium to another. Various mechanisms were adapted such as transformation, that it involves engulfing of the DNA by the bacteria form extracellular space and integrate it in its DNA. The second mechanism is transduction. These relay on Bacteriophages because the virus are the one to carry it to a new bacteria in case of new invasion. Ultimately, we have conjugation; conjugation can be referred as sexual reproduction of unicellular organisms. This involves formation of bridge between two bacteria this will allow easy exchange of plasmid between them. All these processes are proof of that there are a lot to learn from this microscopic world. In the following paragraphs we are going to see each process in detail.

This is the most occurring process by which dead bacteria release their DNA into the environment and from survived bacteria. They will engulf and integrate the new DNA in their own DNA sequence. Mostly, a part called plasmid is the one to get involved in this process because most of the genes needed by the bacteria for survival like genes for resistance are in plasmid and in addition plasmid can easily be transmitted from bacteria to bacteria due to its size and simplicity. Acquiring this new gene it leads the bacteria to shift from non-pathogenic to pathogenic through synthesizing different virulent factor such as capsule; a crucial protective agent against phagocytosis by phagocytic cells such as macrophage, then from this new virulence the bacteria can start to be hard to rid of in case it gets engulfed by the macrophage. Thus, it get proliferate unstoppable which is a great threat to our body.

It is from a brilliant experiment done by Frederick Griffith a British bacteriologist in his experiment (1928), where He demonstrated that introducing of Streptococcus pneumonia species with no capsule together with heat killed Streptococcus pneumonia with capsule has led to death of the laboratory animal. The extracted lesions from the dead animal have revealed Gram positive bacteria with capsule. This experiment have led to a new conclusion that harmless  S. pneumonia have become harmful due to acquisition of virulence genes from dead pathogenic S. pneumonia (Shuttleworth, 2019). 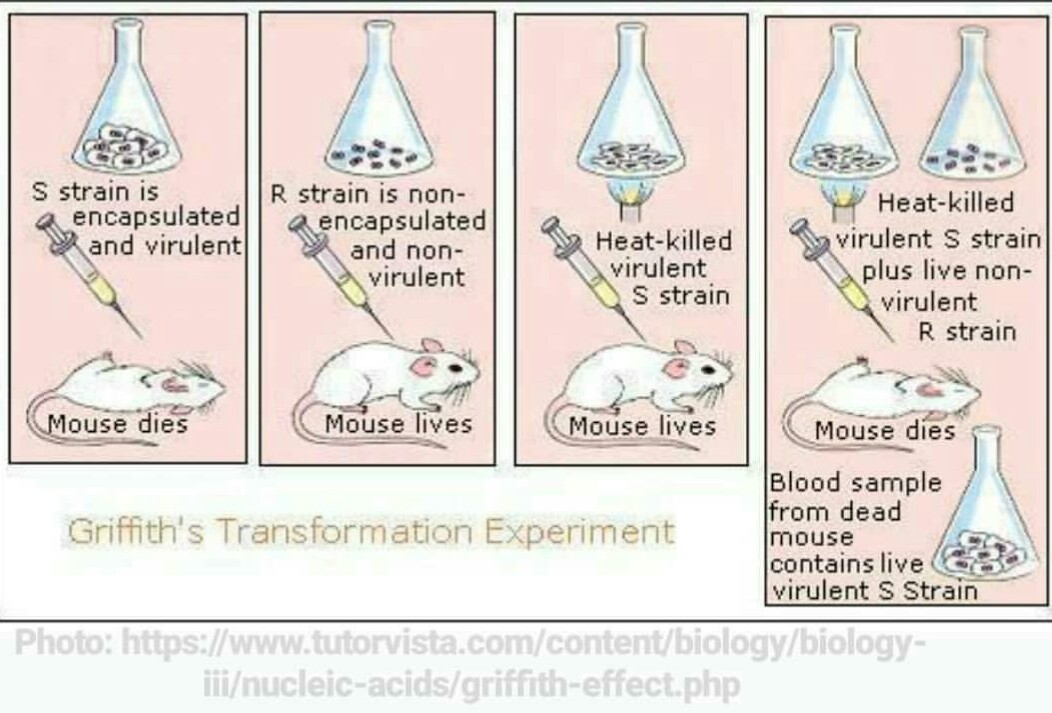 This involves transfer of bacterial DNA via Bacteriophages to other bacteria. Normally, virus introduces its genetic material and integrates within the host DNA (i.e. bacteria) from there in gain control of most of cell machinery and begin to synthesis at large different viral proteins instead of synthesizing cellular proteins. However, for the case of transduction both viral and bacterial DNA is transcribed simultaneously. As result the synthesized virus will possess the genetic material from its host. In return, the new invaded bacterium will acquire the genetic material consists of initial bacterial. As result the new integrated DNA will allow the new bacteria to synthesize new protein that will change its behavior as well. 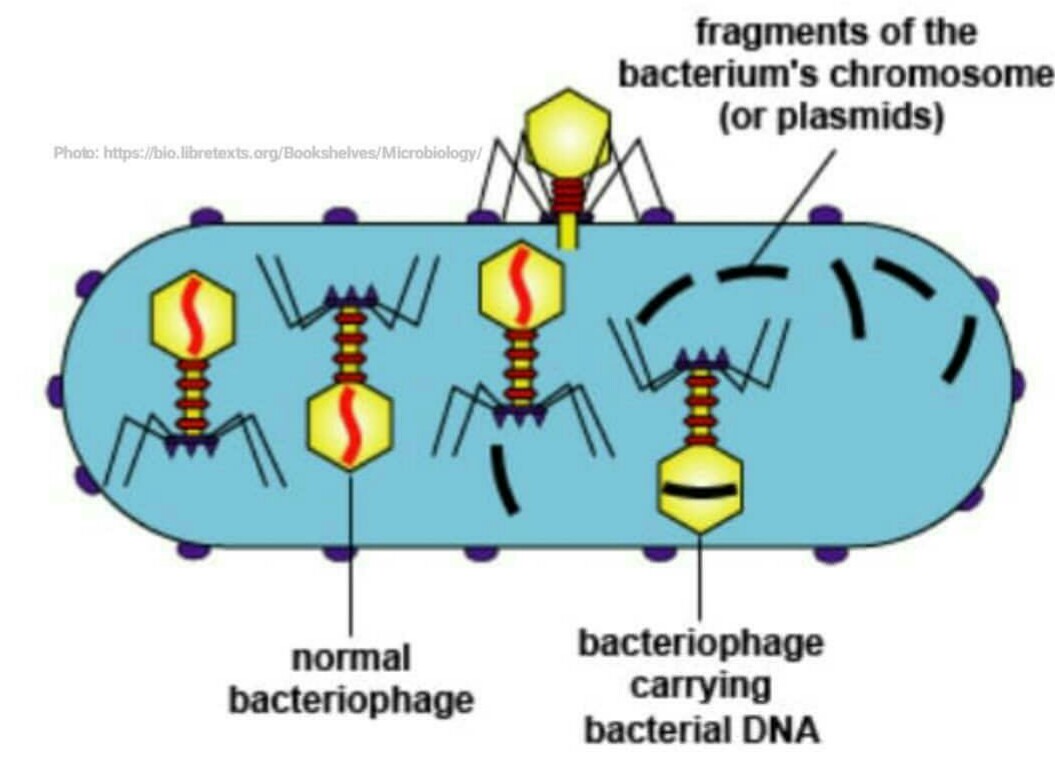 Conjugation is one of oldest technique of gene transfer that involves formation of sexual pilli emerging from one bacterium and end in other, as a bridge. It is from this sex pilli that genetic formation will flow; from this case plasmid will be the source of genetic information. Plasmid is one of genetic bank of bacteria. It stores vital information that helps bacteria to survive and adapt different environment. Moreover, plasmid is the most part of bacteria that involve in                    conjugation because it hosts genes that involves in the formation of F plasmid. F plasmid are 25 genes responsible for synthesizing sex pilli through                transcription of protein needed (Thursdy and Juge, 2017)). During conjugation two mating type will align each other and a sex pilli will be formed form one bacteria named F+, because it has F plasmid , to another named F negative, because it lacks F plasmid(1). 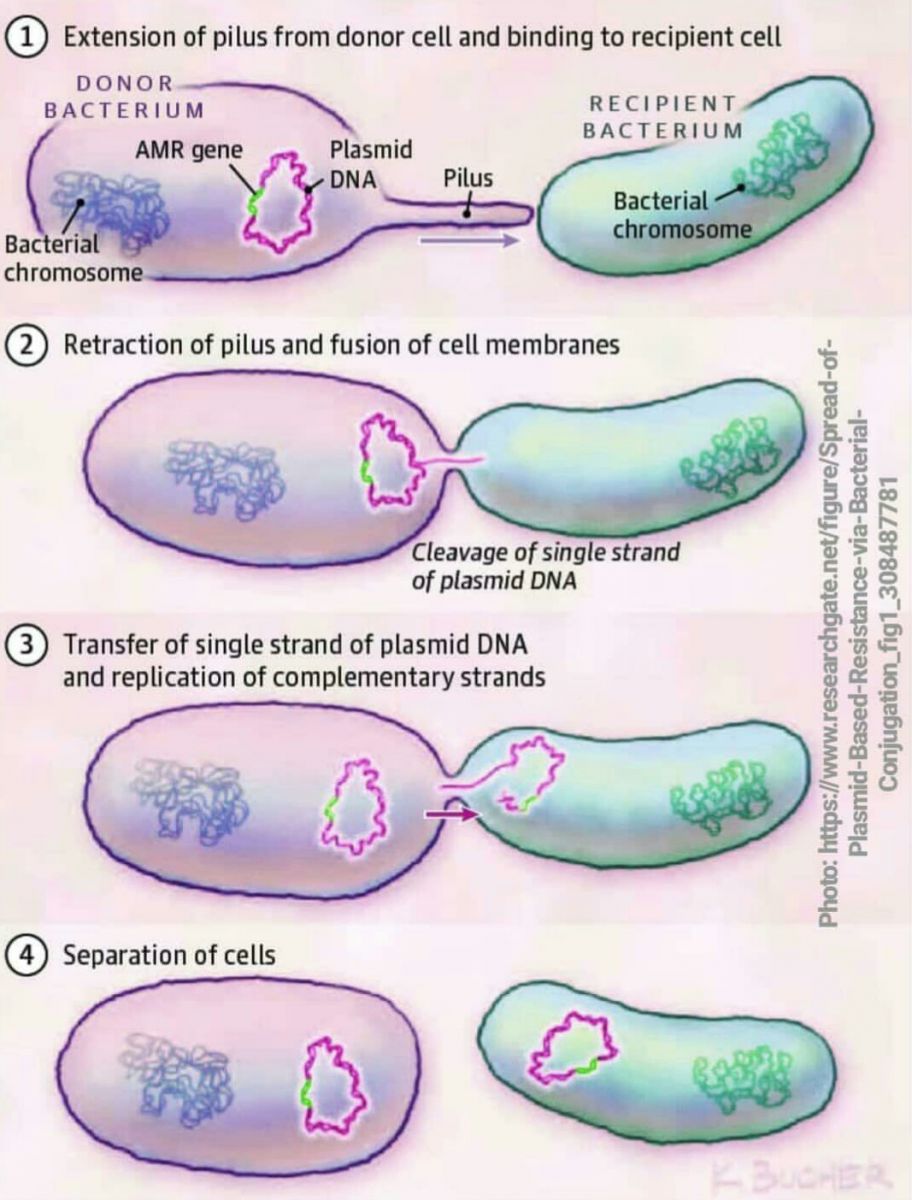 Acquisition of new genetic material can allow our microbiota to have new ability to synthesis new different proteins that are virulent such as capsule. A good example is the experiment done by Frederick Griffith a British bacteriologist. He showed that injecting a non pathogenic Streptococcus pneumonia with no capsule together with heat killed pathogenic Streptococcus pneumonia, with capsule, has led to the death of that experimental animal. From this experiment, it is obvious on how severe this mechanism can be in case of transfer of gene that resist to certain antibiotic for example. Thus even though gene transfer it is important for the bacteria, but there is a concern to look forward on how to monitor it.

On the other hand, there is a strong remark to consider here. Gene transfer is totally different from mutation, as we have seen in the above paragraphs. Gene transfer is a process of accumulation of new genetic material from other bacteria either of the same species or not. However, mutation is the process of changing genetic makeup of an organism as result of deletion, duplication, inversion or transformation of individual genes on chromosomes that will lead to synthesis of abnormal or non functional proteins.

Gene transfer is one of crucial process bacteria use for enhancing their adaptation. It involves three different mechanisms such as transformation, where bacteria engulf and integrate new genetic material. Transduction, here Bacteriophages inject genetic material fragments from the previous host instead of introducing genetic material fragment of the virus that will result in acquisition of new genetic material by new host (bacteria). Ultimately, we have seen conjugation. Conjugation is a sexual reproduction of most unicellular organism. It involves alignment of two bacteria to each other followed by formation of sex pilli, where plasmid will flow through. Though, gene transfer is not getting as much attention it deserves. It can help future researches to have an insight on how these organisms live in their niche.