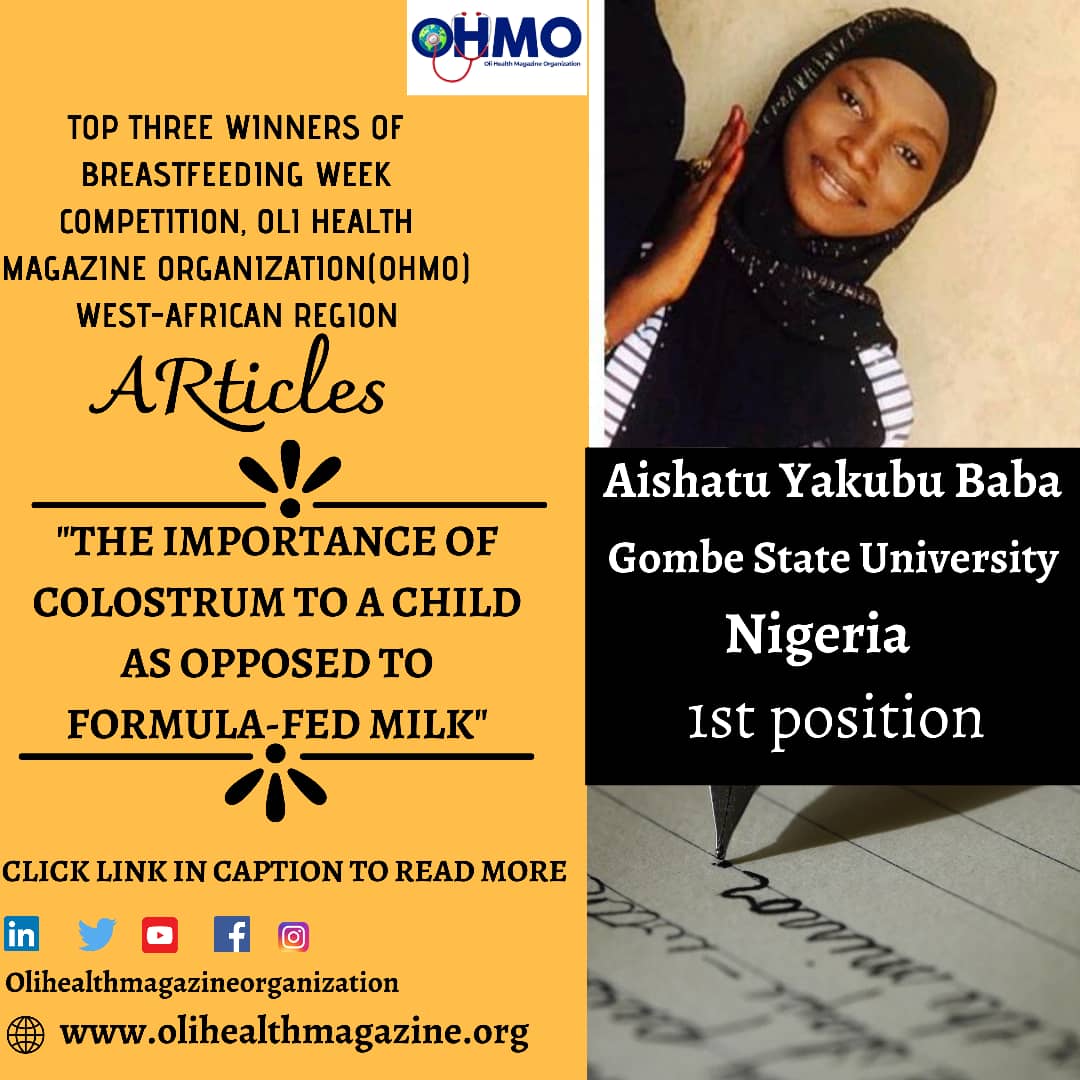 The word “colostrum" according to Oxford English dictionary is derived from the Latin word "colostrum" which is synonymous to first(breast) milk.

It is also defined technically as "a sticky white or yellow fluid secreted by the breast during the second half of pregnancy and for a few days after birth, before breast milk comes in. It is high in protective antibodies that boost the newborn's IQ's system."[1]

Recent studies have shown that the colostrum or otherwise known as breastmilk contains variety of nutrients (in normal and adequate proportions) that a child would require for a normal and healthy growth and development. Hence the reason why mothers milk was considered the best source of infant’s nutrition.[2] On the other hand, infants’ formula or otherwise known as formula milk is intended as an effective substitute for infant feeding.[3]

In an effort to curtail some of the challenges encountered during breastfeeding such as inadequate breastmilk supply among other things; scientist tries to mimic closely(in contents and proportions) the human breastmilk(colostrum) by modification of other sources such as cow milk, soy milk, Amino-acid, non-bovine milk and et cetera as its bases.[4]

This effort though achievable, but could not provide for the complete substitute of the human breastmilk(colostrum), Why? because milk is a living substance made by each mother for her individual infant, a process that cannot duplicated in a factory.[5]

The World Health Organization and other nutritional and health agencies had required that a child be exclusively breastfed for the first six (6) months of life, postpartum. Thus, it is imperative to know why this is significant? And why should a child be breastfed for at least 12 months? As recommended by the American Academy of Pediatrics (AAP).[4]

This article, among other things, will try to come up with the answers to this compounding questions by looking at the invaluable importance a colostrum has on the infant health, growth and development. And some of the major challenges that probably will be encountered using the formula.

1. Breastmilk(colostrum) has the right amount of fat, sugar, water, protein, and minerals needed for a baby's optimum growth and development.[4]

Apart from the somatic growth, colostrum has a variety of other benefits: including modulation of postnatal intestinal function, immune ontogeny, and brain development.[4] These benefits are without doubt crucial to the infant's life which might not be possible if formula is used.

2. Breastmilk or colostrum is also easier to digest than formula and breastfed babies have less gas, fewer feeding problems and cannot adequately digest any bulky food, breastmilk because of its delicate nature (components include---lactose, protein (casein and whey) made digestion easier for the infant to digest. It also acts as a laxative which help in passing the infant first stool(meconium) [7]and therefore prevent constipation.[5]

3. Colostrum contain antibodies that protect infants from ear infections, diarrhea, respiratory illnesses, allergies and other related diseases [5]. Breastfed babies have fewer infections and hospitalization than formula-fed infants. During breastfeeding, antibodies and other germ-fighting factors pass from a mother to her baby and strengthen the immune system. This helps lower a baby's chances of getting many infections including the aforementioned diseases [5].

SOME CHALLENGES ASSOCIATED TO THE USE OF FORMULA:

Because of the complexity of the colostrum(breastmilk) which can changes with the need of the infants, there is most probably problems to be encountered with the use of formula---which cannot provide for those changes. These can include:

1. Lack of antibodies: none of the antibodies found in breastmilk are in manufactured formula. So formula cannot provides a baby with the added protection against infection and illnesses that colostrum does[5].

For this reason, the formula can never be a substitute for the colostrum.

The invaluable importance of colostrum to infants should not be underrated, as it is the best source of their nutrition and maintain optimum growth and development of the newborns. The high concentrations of antibodies in colostrum---which is what make it unique---serves as the first source of adaptive immunity in the newborn's intestinal tract. Also, the challenges with the use of formula should not be undermined, as it can impair with the normal growth and development of the child. Colostrum, therefore, is incomparable to formula as it outweighs it in its importance. Hence, infants should be breastfed so as to benefit from this invaluable nutrients and protection provided by the colostrum.

5. Ben-Joseph, June 2018 "Breastfeeding vs. Formula feeding" accessed from https://kidshealth.org/en/parents/breast a bottle a feeding.html