You are here :Homepage»Dengue: All we need to know

As dengue fever is turning into a severe health crisis across the country, it is important that you know about the disease, how it spreads, and what you should do to minimize the risk of the disease.

Dengue fever is a painful, debilitating mosquito-borne disease. Aedes aegytpi, a species of mosquito, is the carrier of any one of the four closely related dengue virus serotypes -- DEN 1, DEN 2, DEN 3 and DEN 4.

A small percentage of people who had been previously infected by one of the serotypes may develop bleeding and endothelial leak if infected by another serotype which is then referred to as severe dengue or dengue hemorrhagic fever or dengue shock syndrome.

Symptoms appear between 3 to 14 days (on average 4 to 7 days) after the infective bite.

The natural course of the disease has 3 phases:

Prevalence of dengue is  estimated to be  3.9 billion people, in 128 countries, are at risk of infection with dengue viruses.

Transmitted to humans by bite of Aedes mosquito. The mosquito is usually tropical.

Individual risk factors determine the severity of the disease

These include: secondary infection, age, ethnicity and presence of chronic disease 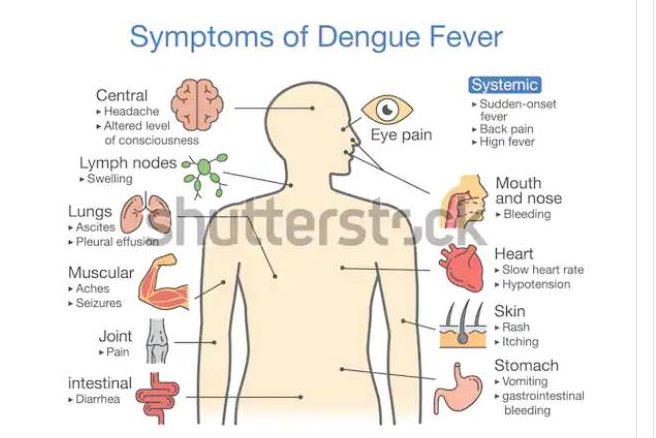 Dengue fever has an incubation period of 3-14 days and the symptoms usually last 2-7 days.

Many individuals may however be asymptomatic.

Live in/ travel to endemic area

Fever and 2 of the following:

Laboratory criteria for diagnosis include

Presence of dengue antigen in autopsy tissue via immunohistochemistry

Other work up include:

Aspirin and other NSAIDS should be avoided

Use tepid sponging to bring down the fever in between the Paracetamol dosing. Soak a clean towel in moderately warm water, then squeeze the excess water away and wipe the body to reduce fever

When to get alarmed


The main prevention technique is avoiding getting bitten by the vector by measures which include:

The first dengue vaccine, Dengvaxia  developed by Sanofi Pasteur was licensed in December 2015 and has now been approved  in 20 countries for use in endemic areas in persons ranging from 9-45 years of age.  It is given in 3 doses 0, 6 and 12 months. WHO issued a conditional recommendation on the use of the vaccine for areas in which dengue is highly endemic as defined by seroprevalence of 70% or higher. Later a retrospective study to determine serostatus at the time of vaccination were released. The analysis showed that the subset of trial participants who were inferred to be seronegative at time of first vaccination had a higher risk of more severe dengue and hospitalizations from dengue compared to unvaccinated participants.

6. WHO 2009 dengue guidelines for diagnosis, treatment, prevention and control

01 September 2019 21:25
Very relevant, article regarding dengue fever because of its challenges it poses recently,