You are here :Homepage»KNOW MORE ABOUT PNEUMONIA

Pneumonia is a common lung infection caused by various germs such as bacteria, Fungi and Viruses. Globally anyone can get pneumonia though some people are at higher risks than others. Pneumonia and its symptoms can vary from mild to severe form depending on the infecting germ and attacked person. Management of pneumonia depends on the cause, severity of symptoms, age and overall health status of the patient. It can be treated for one week to three weeks, though it may be life-threatening. Luckily in some ways, pneumonia can be prevented by getting an annual flu shots (as Flu often lead to pneumonia), frequently washing hands and for people at higher risks, getting vaccinated for pneumococcal pneumonia

Pneumonia can be caused by a variety of microbes ranging from bacteria to fungi, mostly from the air we breathe. Knowing the causative agent is the cornerstone step in treating pneumonia.

The most common bacterial pneumonia is pneumococcal pneumonia. It is caused by a germ called streptococcus pneumonia. This bacteria, normally lives in the upper respiratory tract and only in united states, it affects more than 900000 people yearly. Bacterial pneumonia can occur on its own or arise as a superinfection secondary to viral cold or flu. It can affect one lobe or two of your lung and it may affect the entire lung in some cases. People at the greatest risk, are those recovering from surgery, children, elderly, with weakened immune system, alcoholic, comatous patient. Pneumonia caused by bacteria can either be typical or atypical pneumonia.

Some are atypical because they have slightly different symptoms, they appear differently on Chest X-rays, respond differently to antibiotcs and culture medium compared to their counterparts which are typical. Even though these bacteria are called “atypical” there are not uncommon. There are a lot germs that cause typical pneumoniae such as streptococcus pneumoniae, staphylococcus aureus, and haemophilus influenza among many others.

Examples of bacteria that cause atypical pneumonia

Mycoplasma pneumoniae: affects commonly people younger than 40 years old, especially living and/or working in a crowded conditions like refugee camps and prison centers, it causes a mild to moderate form of the disease, rarely severe form can develop.

Chlamydia pneumoniae: this bacterium causes mostly an upper respiratory infections year-around, some cases it causes a mild form of pneumoniae.

Legionella pneumophila: which causes a very dangerous form of pneumoniae called “legionnaires disease”. Unlike other bacteria which often pass from one person to another, outbreak of this disease results from contaminated water from cooling towers, whirlpool spas and outdoor fountains.

Most common viral pneumonia is due to influenza virus which may be even a severe form of the disease. It is commonly known in people with pre-existing conditions such as lung or heart diseases. Contrary to bacterial pneumoniae, viral pneumoniae often presents no physical sign of lung tissue becoming filled with fluid. Other viruses known as Parainfluenza, Rhinovirus, respiratory syncytial virus and others cause milder to moderate form of pneumoniae. Generally relative prevalence of these viruses varies with geography, host risk factors, season, and pneumococcal vaccination coverage rate and pneumonia severity.

Fungal pneumonia is the most common form of the disease in people with other health problems like HIV/AIDS or weakened immune system, and in people exposed to large dose of fungi such as contaminated soil or bird droppings.

Pneumocystis pneumonia is a very serious fungal pneumoniae caused by pneumocystis jerovecii. It is mostly common in people with weakened immune system due to HIV/AIDS or long-standing medication such as those used in treating cancer or organ transplants.

Soil itself, can be a reservoir for certain types of fungal germs such as Coccidioidomycosis, Histoplasmosis and Cryptococcus. That is why adequate and frequent hand washing is an essential method to prevent some forms of pneumonia.

What are common symptoms in pneumonia?

Cough, fever, chest pain chills and difficulty in breathing are all frequent symptoms. For viral pneumonia the above symptoms often are preceded by headache, muscle pain and general body weakness.

When to call a doctor?

If you think you or your child has symptoms of pneumonia, seek a medical care and don’t wait symptoms to get worse. See your doctor right away, especially to get a medical attention if you are in group of increased risks of pneumonia (older than 65 years, children, smokers, and people with weakened immune system).

Diagnosis of pneumonia requires four major things: throughout history of the patient, physical findings such as fever, rapid breathing and type of lung sounds on a stethoscope. Radiological findings: infiltrates on chest X-rays. 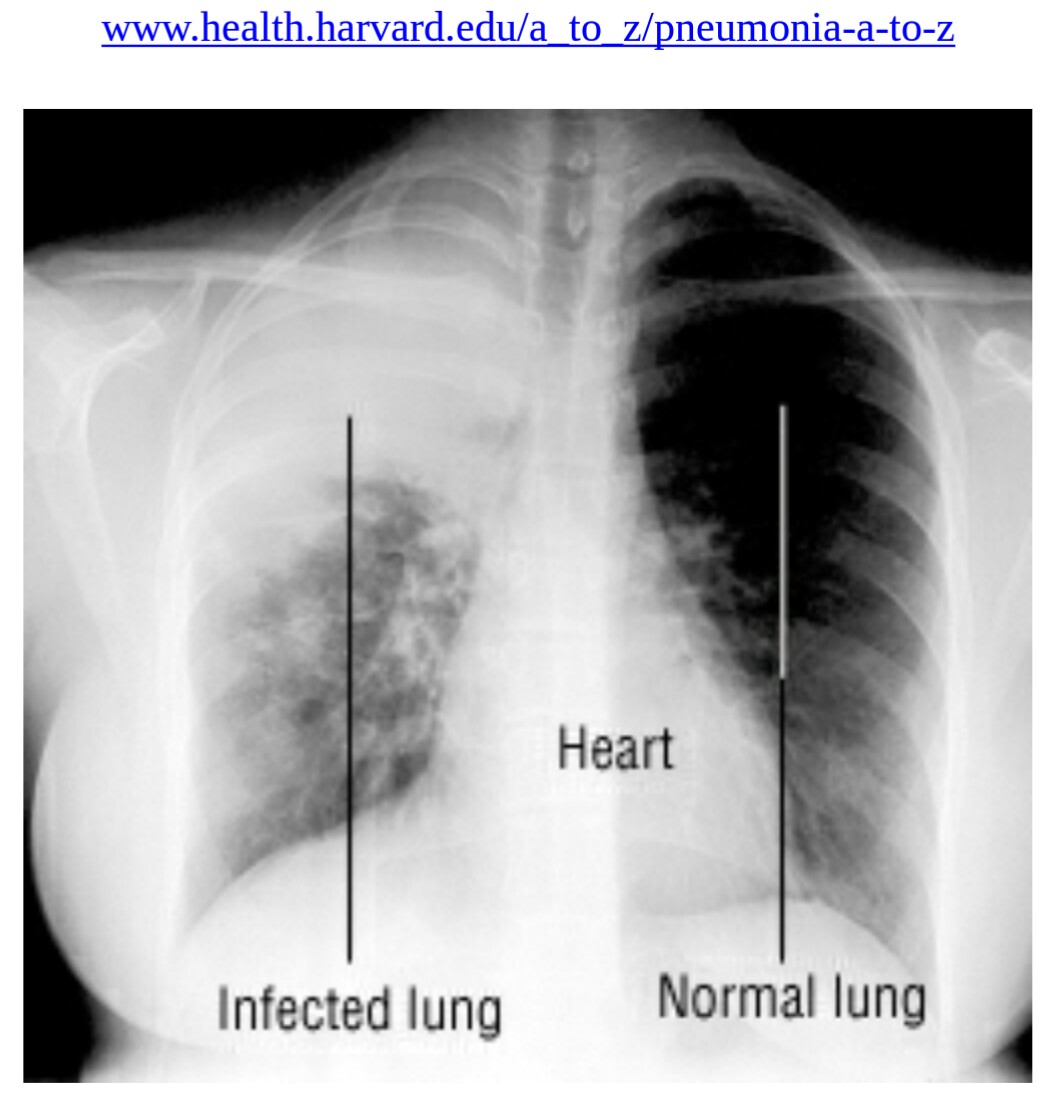 As seen on the image above the upper and a half of the middle lobe is opaque with infiltrates confirming pneumonia disease in this patient.

Lastly on specimen, some advanced tests such as (PCR, Serology and Culture) can be performed to isolate causative agent.

Depending on a severity of the disease, a patient is treated as ambulatory or hospitalized.

Where resources are limited, most common way is empirical treatment used that target both typical and atypical pneumonia basing on the epidemiological distribution of causative agent of pneumonia.

If resources are available, most advanced tests can be used to isolate a specific causative agent in every single case and they treat accordingly with antibiotics or antiviral drugs and supportive management such as painkillers, antipyretics, fluids and Oxygen. Timely and right management effectively prevents complication of the disease.

Possible complication of the disease

Lung abscesses, respiratory failure, sepsis and even death if it goes untreated or poorly treated.

Can pneumonia be prevented?

Yes. You can minimize your risk of getting pneumonia by vaccination (flu shot) on year around basis against seasonal influenza which is a major cause of pneumonia.

For children younger than 5 and adults older than 65 to get pneumococcal vaccine which is common in their age.

10 June 2019 12:51
Thank you so much for your great article Doctor! Please next time can you tell us about PULMONARY FIBROSIS? Keep up with the great work you are doing! I'm Aleksandra Nowakowski from Poland!

20 June 2019 05:09
Thanks Aleksandra Nowakowski for your interest in reading our articles, surely we will work on it in future writings